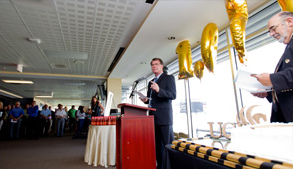 ORLANDO --Oct. 16, 2014 -- In a move that would secure Florida’s role as a national leader in photonics manufacturing, the University of Central Florida is competing for $200 million in federal and private funds to house a national Integrated Photonics Manufacturing Institute for Manufacturing Innovation.

“Together, we are building a new catalyst for our region’s economy while positioning our state as a leader in the manufacturing of the future,” Hitt said.

Hawkins said: “The timing of this effort is perfect. It’s a testament to the hard work of all our partners who are here today and who have helped us be in a position to move forward on this project. As a lifelong Osceola resident and businessman, I’m elated about the opportunities that await us.”

The center, a partnership with Osceola County government, the Florida High Tech Corridor Council (The Corridor) and the Metro Orlando Economic Development Commission, would house many of the research activities associated with the institute if UCF’s bid is successful.

The center is a 100,000-square-foot, state-of-the-art manufacturing research facility set to open in 2016. Partners in the project aim to create the world’s first industry-led smart-sensor consortium. The facility will develop innovative manufacturing processes and materials to advance production of smart sensors. Sensors are expected to shape the future of automobiles, surgical devices, home appliances and much more.

Some smart sensors are already embedded in things we use every day, such as remote controls. There are other potential applications from detecting deadly carbon monoxide to showing a doctor how cancer, Alzheimer’s disease and diabetes affect the body.

Enterprise Florida, the University of Florida and the University of South Florida also are partners in the center’s initiative, a tangible example of what the White House has described as the future for manufacturing in this country.

President Barack Obama earlier this month announced the competition, signaling the White House’s support of investment in this area and the belief that photonics – a new technology that harnesses the power of light and lasers – will be a cornerstone in manufacturing’s future. Manufacturing continues to be the bedrock of jobs in America and photonics manufacturing holds the promise of making America a magnet for good, middle-class jobs.

UCF’s College of Optics & Photonics and its Center for Research and Education in Optics and Lasers, a recognized national leader in its field, is uniquely positioned to lead the effort, which will include partners from industry, universities, state colleges, local governments and nonprofits.

“We are in full-court-press-mode to develop a proposal,” said MJ Soileau, UCF’s vice president for Research & Commercialization.

The federal initiative aligns in many ways with UCF’s strengths in integrated photonics manufacturing, a sign that the government picked up on measures proposed by CREOL in an earlier request for information by the Department of Defense, which would manage the national initiative, said Bahaa Saleh, dean of the College of Optics & Photonics.

Although a request for proposals is not expected until the end of the month, Saleh said he expects the creation of a photonics manufacturing center will remain in the solicitation.

The creation of a federal Photonics Manufacturing Institute for Manufacturing Innovation in Florida would greatly add to the roughly 30,000 photonics-related jobs in the state, said Alex Fong, president of the Florida Photonics Cluster. While a 2009 report by The Corridor and Florida Photonics Cluster put the gross regional product at $3.65 billion and sales of these companies at $7.27 billion, the national impact of the industry rises to more than $3 trillion.

While pursuing the federal money, UCF and its partners are not waiting to move forward with construction of the center.

As these innovations become ready for the marketplace, the center’s partners envision growth in high-wage jobs for Central Floridians. The White House announcement, on the heels of the center’s approval in June, shows UCF and the Central Florida community  are envisioning the future and making it happen today.

As leaders celebrated Thursday and talked about what tomorrow would bring, construction crews were turning earth and preparing the land for the new facility. The project is expected to cost about $270 million over five years and would become self-sufficient five years after becoming fully operational. Osceola County has committed to investing $61 million for design, construction and equipment costs associated with the facility in addition to the land. UCF will lease the building for $1 a year for 30 years and will operate the center. UCF is set to provide $10 million – from non-state and non-tuition sources – to help design and build the center and for start-up costs, as well as an additional $7 million for focused faculty hires.

The Corridor will contribute $1 million initially. The Corridor also will expand the scope of its signature Matching Grants Research Program at UCF, the University of South Florida and the University of Florida to include sensor-driven advanced manufacturing. Up to $5 million of matching funds will be available for research activities and the operation of the consortium over five years.

“From the outset it was clear that this partnership with UCF and Osceola County has the potential for a huge impact in terms of jobs and opportunity that will change our economic landscape, but little did we know it could happen this rapidly,” said Corridor president Randy Berridge.